God’s grace helps church leaders deal with the frustrations that can come in managing church facilities. Here we want to consider how grace affects one specific frustration — when giving isn’t as it should be. After all, it does take money to pay for and maintain our buildings. 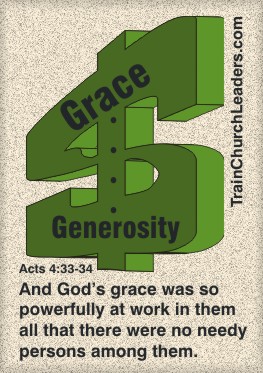 When giving is down or people aren’t living up to their commitments, leaders might be tempted to apply a little guilt manipulation to coerce people into giving. The Christ-like response? – Grace! God’s grace works so much better as a motivator.

Consider the early New Testament church. Since they didn’t meet in buildings like we do today, their financial concerns weren’t about paying mortgages and utility bills. However, great needs existed among them that were met because of God’s grace at work in them.

And God’s grace was so powerfully at work in them all that there were no needy persons among them. For from time to time those who owned land or houses sold them, brought the money from the sales … (Acts 4:33-34)

When writing to the church at Corinth about his expectations for their giving, Paul pointed to the grace God had given to the Macedonian churches who displayed generosity though they themselves had needs. He desired for the Corinthians to “excel in this grace of giving” not to compete with the Macedonians but because of God’s grace. He said, “For you know the grace of our Lord Jesus Christ, that though he was rich, yet for your sake he became poor, so that you through his poverty might become rich.” (2 Cor. 8:9)

Getting people to give, especially sacrificially, takes more than a pep talk. It takes grace, the grace not only exemplified in Jesus, but available to us because of and through Him.

Out of his fullness we have all received grace in place of grace already given. (Jn. 1:16)