When we as a Church with all of our individual differences and various programs seek to come together as a coordinated whole, we’ll face obstacles along the way. Some will plow head-on into whatever, or whoever, stands in their way because they’re unwilling to change. Others will skirt around the obstacles, pretending they don’t exist, never dealing with them. But, those rooted in grace will hurdle obstacles to coordination, acknowledging their existence and pulling on God’s grace to overcome.

One of the biggest obstacles to coordination in the church is self or individualism. Self-promotion rather than promoting the good of the whole and independence rather than interdependence stand in the way of functioning as a coordinated whole. Grace helps us overcome these hurdles. 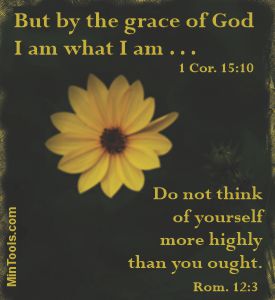 1) When we grasp the significance of grace in our lives, we realize that it isn’t about who I am and what I do but about God and what He does. With that comes the humility we need to work with others.

For by the grace given me I say to every one of you: Do not think of yourself more highly than you ought, but rather think of yourself with sober judgment, in accordance with the faith God has distributed to each of you. (Rom. 12:3)

2) When we understand that we’re different by God’s design, spiritually gifted based on His grace, we have no grounds to elevate ourselves above others. Everyone and their ministries matter and contribute to the growth of the Body.

We have different gifts, according to the grace given to each of us. (Rom. 12:6)

Each of you should use whatever gift you have received to serve others, as faithful stewards of God’s grace in its various forms. (1 Pet. 4:10)

3) When we live by grace, like Jesus, we rid ourselves of a sense of entitlement and humbly serve others rather than feel the need to be served.

For you know the grace of our Lord Jesus Christ, that though he was rich, yet for your sake he became poor, so that you through his poverty might become rich. (2 Cor. 8:9)

But he gives us more grace. That is why Scripture says: “God opposes the proud but shows favor to the humble.” (James 4:6)

4) When rooted in God’s grace we let go of worldly passions and follow God’s ways instead.

For the grace of God has appeared that offers salvation to all people. It teaches us to say “No” to ungodliness and worldly passions, and to live self-controlled, upright and godly lives in this present age, while we wait for the blessed hope – the appearing of the glory of our great God and Savior, Jesus Christ … (Titus 2:11-13)

5) When we approach ministry first as co-workers with God because of His grace then we’re able to work side by side with others knowing that what we do affects one another’s ministries and not just our own.

This website uses cookies to improve your experience while you navigate through the website. Out of these, the cookies that are categorized as necessary are stored on your browser as they are essential for the working of basic functionalities of the website. We also use third-party cookies that help us analyze and understand how you use this website. These cookies will be stored in your browser only with your consent. You also have the option to opt-out of these cookies. But opting out of some of these cookies may affect your browsing experience.
Necessary Always Enabled

Any cookies that may not be particularly necessary for the website to function and is used specifically to collect user personal data via analytics, ads, other embedded contents are termed as non-necessary cookies. It is mandatory to procure user consent prior to running these cookies on your website.