During the Old Testament times, God dwelt among His people in specific ways in certain places at particular times. 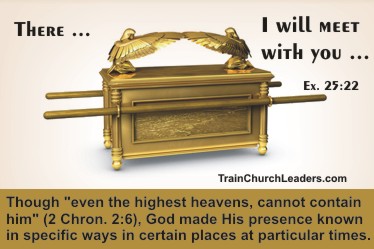 Note: It wasn’t until God’s people settled down in the Promised Land that a specific physical house of worship was used. Prior to that, where they encountered God varied according to their circumstances.

In the Old Testament times the Building Wasn’t Enough

The building wasn’t sufficient. Though King Solomon built a magnificent structure, he still had to admit the limitations of the physical building. — “The heavens, even the highest heavens, cannot contain you. How much less this temple I have built!” (2 Chron. 6:18)

The building wasn’t the main attraction but rather God. — “The temple I am going to build will be great, because our God is greater than all other gods.” (2 Chron. 2:5)

The building wasn’t the end but was meant to be functional, a place to worship in the way God wanted His people to worship at that time. — “But who is able to build a temple for him, since the heavens, even the highest heavens, cannot contain him? Who then am I to build a temple for him, except as a place to burn sacrifices before him?” (2 Chron. 2:6)

Today God dwells within His people. Because His Holy Spirit lives in us, as we will see in the next post, the place we worship isn’t that important. Certainly, all the more, because of His Spirit within us, we should recognize that …

The building in which we meet isn’t sufficient. God-time isn’t limited to what happens within those walls. Because of the Spirit within us, God is with us wherever we go.

The building isn’t the main attraction. While our meeting places should be honoring and glorifying to God, they’re merely tools the Holy Spirit may use as He works in and among us.

The building isn’t the end goal but rather should be a functional tool, only what we need in order to do what God wants us to do. When the building gets beyond our needs, it tends to take on a life of its own, becoming the focal point. We then tend to head down the path of pride, comparing and competing with others — not the attitude and behavior of those who walk in the Spirit.

When we accept these realities we will be ready to view the Church more as a spiritual house (1 Pet. 2:5), composed of people indwelt by the Spirit, rather than a mere physical entity — the topic of the next post.