As previously considered, sometimes we shy away from organization in the Church thinking we’ll lose the freedom we have in Christ, as though being organized isn’t Christ-like. Yet, we find examples of Jesus organizing to best accomplish tasks or meet needs. Let’s look at just one big task — feeding the multitudes as recorded in Mark 6:39-41.

We can learn a lot from Jesus to apply to the development of our own organizational skills even from this one situation of feeding a multitude. 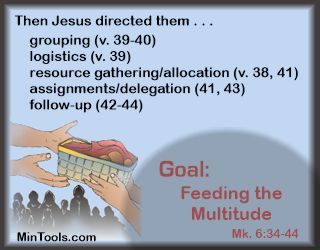 The goal had already been established that the disciples would give the people something to eat with available resources rather than send them away hungry or go purchase enough food themselves to feed the multitude of people (Mk. 6:35-38).

According to verses 39-40, Jesus directed the disciples “to have all the people sit down in groups on the green grass. So they sat down in groups of hundreds and fifties”. Scripture doesn’t record the reasoning behind such grouping but Jesus was the One who purposefully instructed the disciples to do it that way. We can only surmise He had a good reason for doing so that made it the best approach to feeding such a large group of over five thousand people. Perhaps grouping this way related to span of control. How many people in a group could be fed with the size baskets they had?

Do we departmentalize and group because it is the best way to meet current needs or because we’ve always done it that way?

In this case, Jesus directed the disciples to have the people sit down on the grass (Mk. 6:39). Once again, we do not read why but we can note two logistical points: 1) They were to sit down. 2) They were to sit down on the grass. — Perhaps it was to make it easier for them to eat but also for the disciples to navigate around the groups and easily see to whom they had already distributed food and who still needed it.

In this case, the disciples found that they had five loaves and two fish to work with and brought it to Jesus (Mk. 6:38). Using the available resources, Jesus then broke the loaves and divided the fish so as to meet the needs and reach the goal of feeding the multitude. Also observe how Jesus took these resources and “looking up to heaven, he gave thanks” (Mk. 6:41) before He broke the loaves that would be distributed.

Jesus would miraculously produce enough bread and fish from the five loaves and two fish. The disciples would distribute it (Mk. 6:41).

An evaluation, of sorts was made, that “all ate and were satisfied” (Mk. 6:42). They gathered leftovers rather than let them go to waste (Mk. 6:43). We read specifically that twelve basketfuls were collected, undoubtedly to be used in some way, though Scripture does not say how.

Let’s learn from Jesus, becoming more and more Christ-like even in the way we organize.

2 Replies to “Organizational Skills of Jesus”