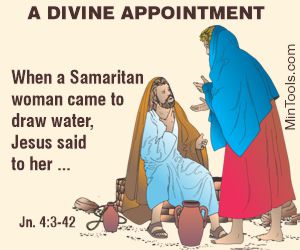 Think about the biblical account in John 4 of Jesus and the woman at the well. Verse eight says, “His disciples had gone into the town to buy food.” While the passage doesn’t say He delegated the task to them, that’s very likely what happened when we look at other passages where food was needed.

Jesus Didn’t Have to Delegate the Task to His Disciples

Jesus could have gone with the disciples. Or, He could have miraculously provided the food which He did on other occasions for multitudes so He certainly could have done it for just His disciples.

What Might Have Happened if Jesus hadn’t Delegated the Task to His Disciples?

Consider what would have happened if Jesus hadn’t delegated to His disciples the task of going to town to buy food.

Why Delegating Was Necessary in This Situation

Focused on His primary purpose, Jesus later told His disciples after they returned, “My food ‘is to do the will of him who sent me and to finish his work” (Jn. 4:31-34). — If we’re going to engage in Christ-like delegation, we too need to know what’s most important for us to do so we can determine what we should and shouldn’t delegate to others.

Jesus obviously knew He had a divine appointment with this woman. Sending the disciples off to get the food freed up His time and set the stage for Him to do something only He could do. — That’s what delegation truly is about. Let’s learn from the Master.

One Reply to “What If Jesus Hadn’t Delegated?”